His roles in Bride of Frankenstein, The Mummy, The Black Cat and many others – most now considered classics of the genre – ensured his reputation as 'The King of Horror'.

Drawing on detailed research, previously unpublished letters, and interviews with those who knew him this new biography, Boris Karloff: More Than a Monster, dispels the often repeated myths associated with the star – many perpetuated by Karloff himself – and reveals a wealth of new information about the private and professional life of Boris Karloff.

Although forever associated with his breakthrough role of 'the Monster' in Frankenstein (1931) Boris Karloff had a career that spanned almost 50 years and over 150 movies - from the era of the silent picture through to the days of the 'Swinging Sixties'.

His roles in Bride of Frankenstein, The Mummy, The Black Cat and many others – most now considered classics of the genre – ensured his reputation as 'The King of Horror'. 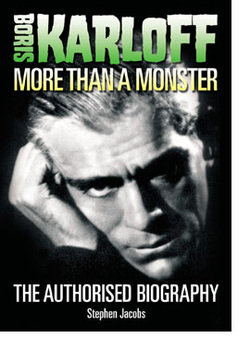 Born William Henry Pratt in South London in 1887, Karloff defied family expectations and rejected a life in Government service. Instead he emigrated to Canada were he finally found work as a professional actor. After years touring Western Canada and the United States he arrived in Hollywood and tried his hand at movie acting. But success did not come overnight and the actor worked in pictures for over a decade before being asked to test for the role of the Monster. As public tastes changed Karloff was willing to adapt to the times and embraced work on the theatre, radio and television.

His experience of the movie studios treatment of his colleagues led Karloff to advocate actors' rights and he became instrumental in the creation of the Screen Actors Guild.

Few actors ever achieved the iconic status Karloff has been awarded.

This is the only book that tells the WHOLE story!

» Find out more about Boris Karloff, the man